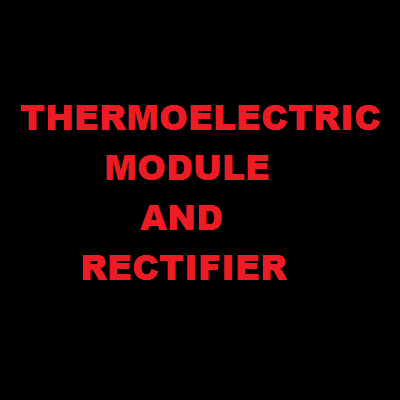 A standard module consists of any number of thermocouples connected in series and sandwiches between two ceramic plates . Different type of TECH modules are single stage , three stages, four stages ,center hole modules etc. single stage will be suitable for a wide range of colling applications with low of high heat pumping capacities.

By applying a current to the module one ceramic plates is heated while the other is cooled .The direction of the current determines which plate is cooled. The number and size of thermocouples as well as thee materials used in the manufacturing determine the colling capacity. Colling capacity varies from fractions of Watts up to many hundreds.

When the thermoelecric module start his working one side is cold and other side is hot. So there is a need to remove the heat from the module. So we use  of a exhaust fan of size 4*4 inches. By this the one side which is starts to get hot after flow of current through the module the colling fan which use as exhausion of heat from Thermoelectric plate and remove heat to work very efficient by thermoelecric module.

When a battery is connected to an external circuit, elecrolytes are able to move an icons within, allowing the chemical reactions to be completed the separate terminals and so deliver energy to the external circuit.

Historically the term “battery” specifically refered to the device composed of multiple cells, however the usage has evolved to additionally include devices composed of a single cell.

3 thoughts on “THERMOELECTRIC MODULE AND RECTIFIER”