The Two Main Groups Of Rivers Of India & Drainage of India 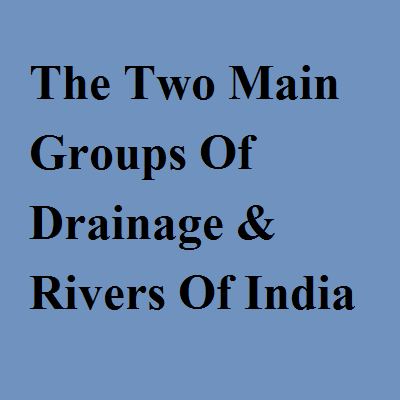 In this three major river systems are there

Sources Bhagirathi from Gaumukh, Alaknanda from Badrinath, Mandakini from Kedarnath.

2. Rivers of the Peninsula

Rivers Flowing into Bay of Bengal

Cauvery (805 km) It is the largest peninsular river. Known as the ‘Ganga of the South’. Rises from Brahmagir range of Western Ghats. Tributaries: Hemavati, Lokpawni, Shimsa.

Narmada (1057 km) It has only 1/10th part in Gujarat and the rest in MP. Rises in Amarkantak Plateau and flows into Gulf of Khambat. Forms the Dhuan Dhar Falls. Main tributaries: Hiran, Burhner, Banjar, Shar, Shakkar, Tawa etc.

Luni (450 km) Rises from Aravallis. Also called Salt River. It is finally lost in the marshy grounds at the head of the Rann of Kachchh.

Wular Lake (J & K) is the largest fresh water lake of India. From Sambhar Lake (Rajasthan), salt is produced. Other important lakes are Vembanad in Kerala, Kolleru in Andhra Pradesh and Pulicat in Andhra Pradesh only.

The three important Gulfs in the Indian territory are