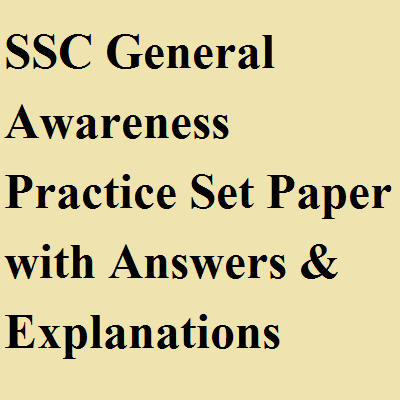 1. Which one of the following is a programme that converts high level language to machine language?
(a) Linker
(b) Assembler
(c) Interpreter
(d) Compiler

3. Which one of the following glands produces the growth hormone (somatotrophin)?
(a) Adrenal
(b) Pancreas
(c) Pituitary
(d) Thyroid

4. Who among the following was elected as the President of All India Khilafat Conference met at Delhi in 1919?
(a) Motilal Nehru
(b) Mahatma Gandhi
(C) MA Jinnah
(d) Shaukat Ali

5. Which one of the following Indian states does not have a common international border with Bangladesh?
(a) Manipur
(b) Paschim Banga
(C) Tripura
(d) Asom

6. Who among the following is the author of the book. “The Namesake”?
(a) Arundhati Roy
(b) Amitava Ghosh
(c) Jhumpa Lahiri
(d) Kiran Desai

7. Who among the following was not a member of the Constituent Assembly?
(a) Sardar Vallabhbhai Patel
(b) Acharya JB Kriplani
(c) Lok Nayak Jayprakash
(d) KM Munshi

8. Carbon dioxide is called a greenhouse gas because
(a) its concentration remains always higher than other gases
(b) it is used in photosynthesis
(c) it absorbs infrared radiation
(d) it emits visible radiation

9. Laser is a device to produce
(a) a beam of white light
(b) coherent light
(c) microwaves
(d) X-rays

10. In the human body, Cowper’s glands form a part of which one of the following system?
(a) Digestive system
(b) Endocrine system
(c) Reproductive system
(d) Nervous system

11. Mist is a result of which one of the following
(a) Condensation
(b) Evaporation
(C) Sublimation
(d) Saturation

14. Fiscal Policy in India is formulated by
(a) the Reserve Bank of India
(b) the Planning Commission
(c) the Finance Ministry
(d) the Securities and Exchange Board of India

15. Fat can be separated from milk in a cream separation because of
(a) cohesive force
(b) gravitational force
(c) centrifugal force
(d) centripetal force

17. Malaria in the human body is caused by which one of the following organisms?
(a) Bacteria
(b) Virus
(c) Mosquito
(d) Protozoan

21. What is the theme of the first-ever “National Yoga Olympiad”, which has been organized by the NCERT?
(a) Yoga for Peace and Dhyana
(b) Yoga for Health and Harmony
(C) Yoga for Kriya and Harmony
(d) Yoga for Emotional and Mental development

22. Mohammad Shahid is associated with which sports?
(a) Hockey
(b) Badminton
(c) Wrestling
(d) Boxing

23. KG Subramanyan, who passes away recently, was a famous personality of which field?
(a) Art
(C) Sports
(b) Journalism
(d) Politics

25. Which of the following countries has become the newest member of the Missile Technology Control Regime (MTCR)?
(a) Canada
(b) India
(C) Brazil
(d) Poland

Answers & Explanations Of Above Questions

1. (d) A compiler is a special programme that processes
statements written in a particular programming
language and turns them into machine language or
“code” that a computer’s processor uses.

2 (b) A company organized for commercial purposes is
called an enterprise. Classification of an enterprise into
public or private sector is based on ownership of
assets of the enterprise.

3. (C) Somatotrophin is produced by the anterior pituitary.
It is a peptide hormone that induces growth, cell
reproduction and regeneration.

4. (b) Gandhiji was elected President of the All-India Khilafat
Conference which met at Delhi on November 23, 1919.
They decided to withdraw all cooperation from the
government if their demands were not met.

5. (a) Manipur does not have boundary with Bangladesh.

9. (b) A laser is a device that emits coherent light through a
process called stimulated emission.

10. (e) Cowper’s gland is related to reproductive system.
Cowper’s gland is the bulbourethal gland found in
human males. They are found in pair and secrete
viscous secretion called pre ejaculate that helps in
coitus.

11. (a) Mist is a thin fog resulting from condensation in the
air near to the earth’s surface.

12. (a) Dyarchy was a system of double government
introduced by British India.

13. (b) Mohammed Ali Jinnah was Indian Muslim politician,
founder and first governor-general (1947-48) of
Pakistan. As the first Governor-General of Pakistan,
Jinnah worked to establish the new nation’s
government and policies, and to help settle the millions
of Muslim migrants who had emigrated from the new
nation of India to Pakistan after the partition. He is
revered in Pakistan as Quaid-i-Azam.

14. (c) The Department of Economic Affairs (DEA) under
Ministry of Finance is the nodal agency of the Union
Government to formulate and monitor country’s
economic policies and programmes having a bearing
on domestic and international aspects of economic
management.

18. (b) The focal length of a convex lens is shorter for blue
light than for red.

19. (C) Ram Prasad Bismil was the famous freedom fighter
who was involved in the historic Kakori train robbery.
He was born in 1897 at Shahjahanpur, Uttar Pradesh.
On 9th August, 1925, Ram Prasad Bismil along with
his fellow followers looted the money of the British
government from the train while it was passing through
Kakori, Lucknow. Except Chandrashekhar Azad, all
other members of the group were arrested. Ram Prasad
Bismil along with others was given capital punishment.
This great freedom fighter of India was executed on
19th December, 1927.

20. (c) Himadri Station is India’s first Arctic research station
located at Spitsbergen, Svalbard, Norway. It was
inaugurated on the 1st of July, 2008 by the Minister of
Earth Sciences.