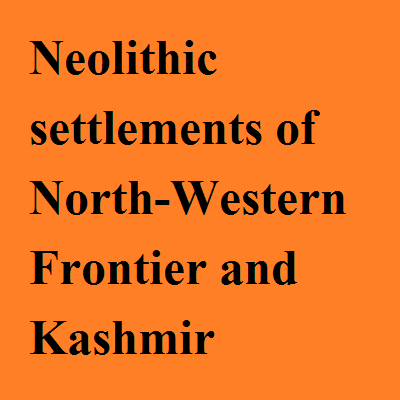 In the North-Western Frontier the sequence is built up on the basis of excavations at Ghaligai cave and a number of grave sites such as Timargarha, Aligrama, etc. all in Swat. In the Ghaligai cave the lowest levels produced coarse handmade pottery. According to the Allchins, in Swat there is clear evidence that in period IV of Ghaligai cave, a new element entered the valley, associated with, the Gandharan graves and bringing a marked increase in the use of copper and bronze, distinctive burial rites and a cult of fire, inferred by the presence of some cremations, etc. The parallels for the material culture are in the Caucasus, north Iran and southern central Asia.

The best known Neolithic site in Kashmir is at Burzahom. The deposits at Burzhom have been divided into four periods, out of which the first two are Neolithic, the third Megalithic and the last, early historic.

The most distinctive trait of Period I is pit welling. Both circular/oval and rectangular/squarish pits were used. Charcoal ash, potsherds etc. were found from these pits. Polished axes, harvester pounders polishers, chisels and maceheads were the main stone tool types in use. The bone tool industry comprised harpoons, needles, awls, spearpoints, arrowheads, daggers and scrapers. No burials were found in Period I. Pots of various colours ranging from steel grev to brown were found. These were made over mats and were occasionally decorated with incised and notched designs.

Period II is marked by the occurrence of mud and mud-brick houses and some new shapes of pottery. These new shapes comprised dishes with hollow stand, globular pots, jars, stems, with triangular perforation and a funnel shaped vase. The pottery was still handmade and it is only towards the close of this period that a wheelmade red-ware pot containing 950 beads of agate and carnelian was found. In stone and bone industries there is continuity from Period I though the tools are better finished and larger in number
A general bracket of 2400-1500 BCE is given to the Burzahom Neolithic culture.

Neolithic -Chalcolithic culture of the South

As known from the excavations at Hallpur, Tekkalakota and Sangankullu, the huts were generally circular, of one room, with a low mud plinth, fortified by a split bamboo screen and a conical thatched roof. The floors were occasionally white-washed with lime. Storage jars and chulahs (hearths) were common finds in such houses.

Bowls of various shapes, shallow dishes, lipped, lugged, spouted, channel spouted handled and hollow-footed bowls; jars; dishes on stand; and perforated pots are the main shapes of Neolithic Phase 1 pottery. All pottery of this phase was handmade. The unburnished grey and brown wares of phase I disappear in the second phase and even the burnished grey ware occurs rarely. Phase II is marked by the appearance of a dull red ware with painting in black or violet and a black-and-red ware, occasionally painted.

Among the tools, the axes are the most common. Other stone tool types are adzes, scrapers, chisels, wedges, picks, borers, hammer stones, sling stones, querns, etc.

The available C-14 dates show that the Southern Neolithic time-spread is confined to circa 2500-1000 BCE.